In the most recent Israeli aggression on the Gaza Strip, we saw reports that people were unable to donate for impacted families under attack using Venmo. Human rights organizations in Palestine reported that they were unable to access funds they raised on PayPal to support impacted communities. This all comes as a result of an ongoing and systematic exclusion of Palestinians from digital payment platforms that we have witnessed take place for years.

Since 2016, 7amleh — The Arab Center for the Advancement of Social Media and a number of civil society organizations have been advocating for PayPal to offer its services in Palestine. PayPal, a global digital payment company, operates in over 200 countries, including some countries which struggle with major political and economic instability such as Yemen, Egypt, and Somalia. PayPal offers its services in Israel, including in Israeli settlements in the occupied West Bank, but the company does not grant Palestinians with bank accounts in the West Bank and Gaza Strip access to its platform. PayPal claims that its services are unavailable to Palestinians on the basis of its “Prohibited Countries” policy, which classifies Palestine and around 30 other countries as “high-risk” areas.

PayPal does however provide full access to the estimated 9.2 million Israeli citizens, this includes Palestinian citizens of Israel, as well as Israeli settlers residing in Israeli settlements in the West Bank, which are unlawful under international law. PayPal services are also available to the nearly 340,000 Palestinian residents of occupied East Jerusalem. 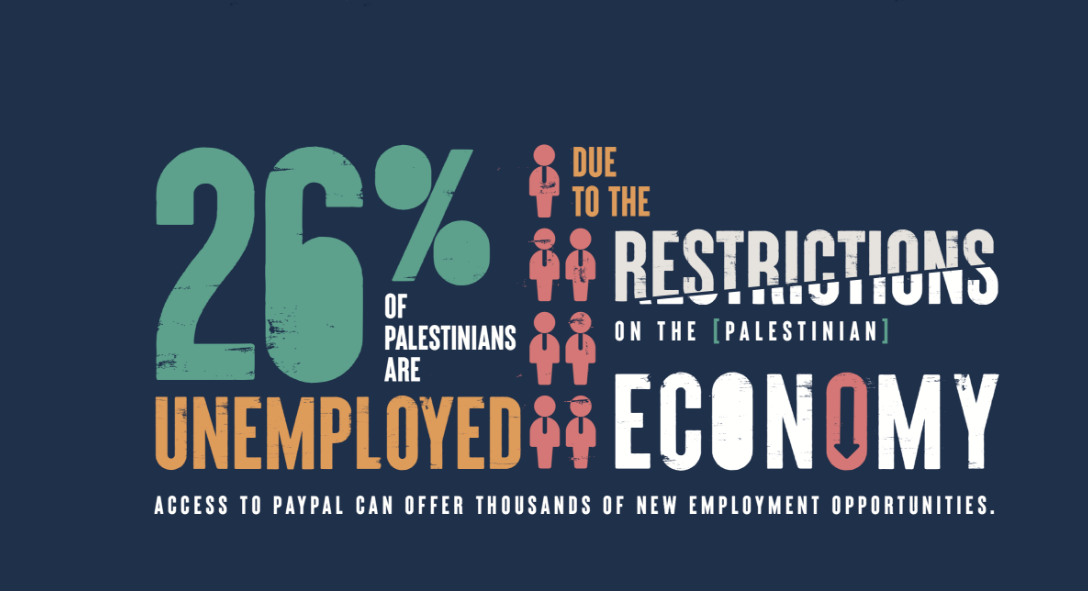 In Palestine, PayPal’s services are provided under conditions of discrimination, as the company excludes over five million Palestinians in the rest of West Bank and Gaza Strip, from its services. Whereas PayPal’s services are available to Israeli settlers residing in settlements in the occupied West Bank, which are often built unlawfully on Palestinian land for the sole benefit of Israeli settlers and entrench discriminatory Israeli practices against Palestinians, their Palestinian counterparts living in the same territory are denied access to the platform.

PayPal’s decision is also biased as it unequally provides Israeli freelancers, startups, entrepreneurs and businesses with far more opportunities than their Palestinian counterparts, who face high unemployment rates (28% as of March 2021, including 17% in the West Bank and 48% in Gaza)) and a codependent and weak economy, in large due to Israel’s discriminatory restrictions imposed on imports, exports, access to resources and movement in the West Bank and to an even larger extent in the Gaza Strip. By excluding Palestinians in the West Bank and Gaza Strip from its service and making it available to Israeli settlers, PayPal indirectly contributes to the inherently discriminatory Israeli occupation, and further exacerbates its devastating impacts on the Palestinian population and its economy.

Since 2016, numerous civil society organizations have tried to challenge PayPal’s policy in Palestine through various efforts. These included a 2016 letter to PayPal’s CEO, Dan Schulman, by Americans for a Vibrant Palestinian Economy and 43 other signatories; an online petition by SumofUs, Jewish Voices for Peace and the U.S Campaign for Palestinians Rights since 2017; as well as calls for a boycott campaign against PayPal by the Australian Palestinian Advocacy Network (APAN).

These advocacy measures have led multiple investors who hold stocks at PayPal to bring up the issue of Palestine at PayPal’s annual shareholder meetings. PayPal’s responses to such efforts, between 2016 and 2018, were limited to providing that there were no immediate announcements nor near-future plans to operate in Palestine. 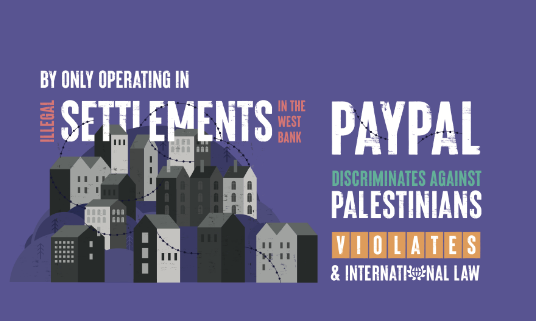 In 2020, 7amleh, in cooperation with the American Friends Service Committee (AFSC), submitted a statement emphasizing the importance of providing Palestinians with access to PayPal and ensuring that its policies do not discriminate against the world’s most vulnerable groups. PayPal once again did not address the discriminatory conditions of its operations in the oPt, but provided that they hope to be able to further assess the risk of operating in Palestine in the future. In their response to 7amleh, PayPal said:

“Our ambition is for everyone to have access to our services for digital payment and commerce, in accordance with applicable regulatory requirements. Although we are not currently providing services in Palestinian Territories, we hope ultimately to be able to address the risk, compliance, regulatory and resource allocation issues to properly serve customers in this region and other markets where PayPal is not yet present in due course. While we do not have anything to announce for the immediate future, we continuously work to develop strategic partnerships, address business feasibility, regulatory, and compliance needs and requirements, and evaluate the necessary local authority permissions for new market entries.”

As the world’s most recognized online payment platform, access to PayPal can generate more income, employment opportunities, and improve the livelihoods and future growth of thousands of Palestinians. This is particularly impactful for freelancers, entrepreneurs, business owners and organizations, and/or groups and individuals who turn to crowd-funding to support themselves. However, the discriminatory exclusion and inability of Palestinians to access PayPal’s platform has further contributed to preventing the overwhelmingly young Palestinian population form seeking employment as freelancers or entrepreneurs, who already face systematic discrimination in access to resources and livelihood opportunities compared to their Israeli counterparts residing in Israel or the oPt, and limited the growth of the struggling Palestinian economy by excluding Palestinians from the global market. In 2019, over 30 participants voiced this need in a roundtable that was organized by 7amleh encompassing a diverse group of Palestinian students, entrepreneurs, and business owners.

Preparedness of the Palestinian Economy and Legal System

In contrast with PayPal’s policy that frames Palestine as a “high-risk” area, 7amleh research has found that Palestinians have been able to demonstrate their legal, economic, and social preparedness to access digital payment services. In its report “Palestine & PayPal” released in 2018, 7amleh found that the purchasing power of Palestinians is in line with the purchasing power of citizens in several countries where PayPal provides its services. The research estimated that around 80% of households in Palestine (upper, middle, and lower class) would use PayPal if it were accessible to them. 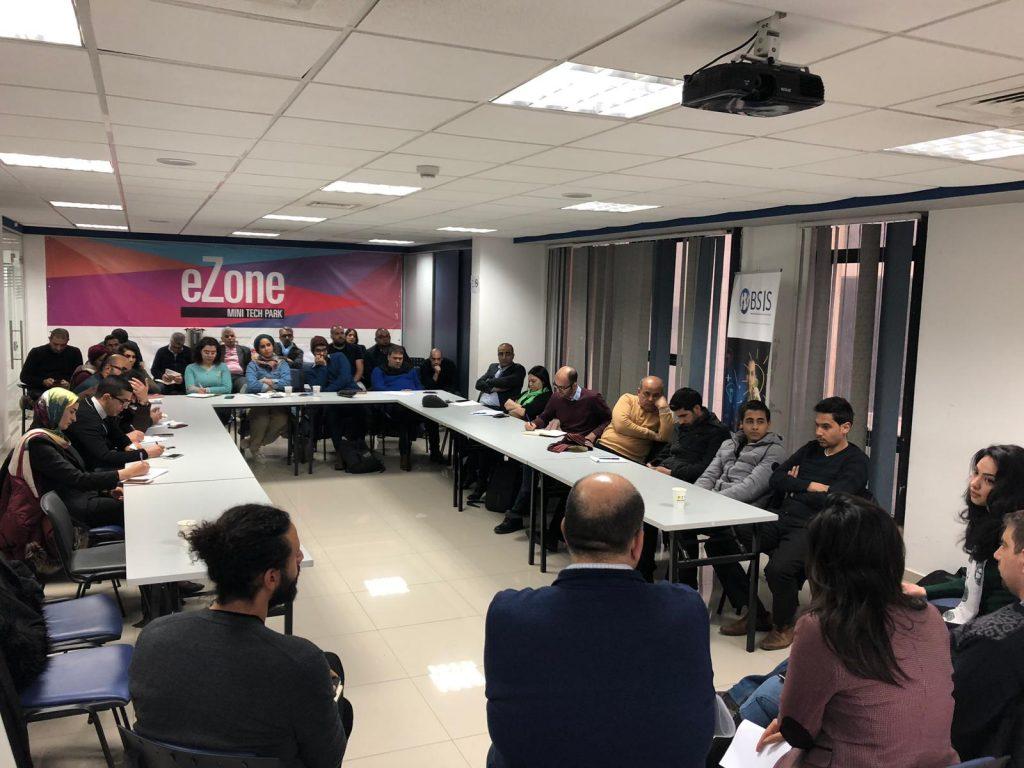 For the report also evaluated the financial and regulatory preparedness of Palestinian financial institutions to use PayPal, which were evident in (i) the implementation of the Basel I Recommendations, an internationally-recognized banking regulations, by most Palestinian banks, which have had long-lasting ties with prominent financial services, including Visa, MasterCard, Swift, and MoneyGram; and, (ii) the implementation of the Financial Action Task Force (FATF) recommendations by the Palestinian Monetary Authority on coordinated efforts to combat money laundering. The research further demonstrated the preparedness of the Palestinian legal system to accommodate digital payment services, evident in the passing of laws such as the “Electronic Transactions Law,” which facilitates electronic transactions and establishes measures to combat money laundering and fraud in line with international standards. 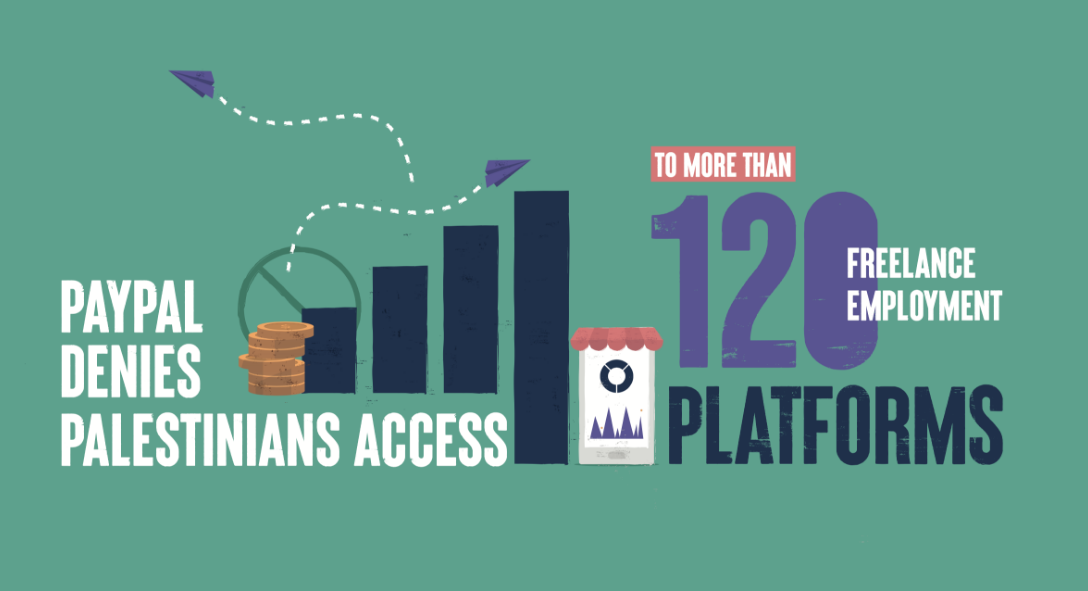 PayPal’s discriminatory exclusion of Palestinians from accessing its network, has left many Palestinian freelancers, entrepreneurs and businesses with limited alternatives that significantly limit their work options. Other companies that provide online payment services are often either subsidiaries of PayPal, and as such have the same policy on Palestine, or competitors with little interest in working in Palestine, particularly due to less pressure to invest in truly assessing the risk and implementing human rights principles in their work. As a result, Palestinian freelancers and entrepreneurs have to rely on wire transfers either through banks or other monetary service providers, such as Western Union or MoneyGram. Not only does this limit the opportunities available to Palestinians, as most international employers often refuse to make a wire transfer, it places additional restrictions and higher fees over the amounts of money being transferred. In addition to wire transfers, Palestinians have launched local digital payment services, such as PalPay and Jawwal Pay, which have enabled users to purchase and sell products and services easily online in the West Bank and Gaza. However, these services are only operational in Palestine and users/customers cannot exchange cash with vendors or employers anywhere else. 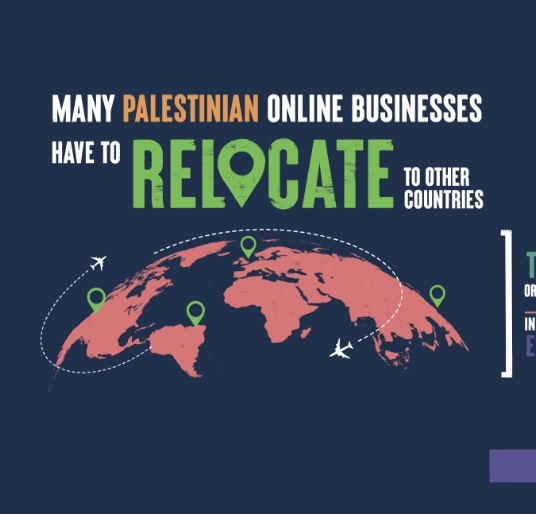 PayPal’s current policy on Palestine is discriminatory in violation of human rights and international law standards. As Palestinians continue to demonstrate their need and preparedness to access the service, 7amleh provides that PayPal’s discriminatory refusal to operate in Palestine, while operating normally in Israel and illegal settlements in the West Bank, results in serious violations of Palestinians’ digital and human rights and contributes to sustaining illegal Israeli settlements. Additionally, PayPal needs to establish clear and consistent policies on how decisions are made regarding accessibility to its services, and to establish fair and open appeals processes to such decisions. Countries that are banned should be regularly updated about their status and any changes that may occur to it.

YOU CAN MAKE A DIFFERENCE

SEND A LETTER TO PAYPAL